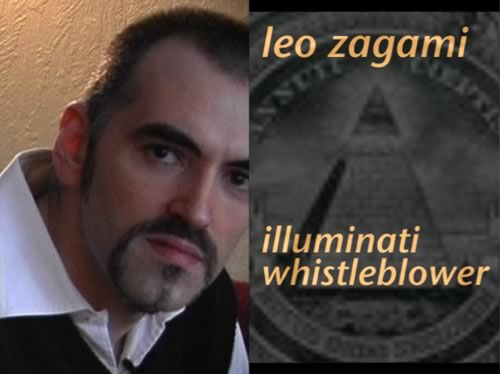 "The weapons business is the big business to make cash. I was a rich man when I was in that kind of business. Now I'm a poor man. The difference is that now I'm an honest man. Before I was a crook."
Leo Zagami

Leo Lyon Zagami, ex-member of the Comitato Esecutivo Massonico - the Masonic Executive Committee - of Monte Carlo, was, until recently, a high level member of the Italian Illuminati. He is a 33rd degree Freemason, and a senior member of the infamous P2 Lodge. He was the 'Prince': prepared to take over after the older Illuminati 'King', Licio Gelli. He was born of a Scottish-Sicilian Illuminati aristocratic bloodline, and so has been involved in the Illuminati Order since childhood.

Disgusted with satanic black magic rituals, and with the true intentions of those who regard themselves as the elite controllers of the planet, he has now made the commitment to tell the real story of those who seek to rule us all without our consent.

Quick, intelligent, likeable, passionate, and with a huge amount of information at his fingertips about the inside workings of the Powers that Be, Leo welcomed us into his house in Oslo, Norway, where he lives in what might be called exile.

In our two hour interview we were barely able to scratch the surface of everything he knows, and what we present is a summary for those unfamiliar with the labyrinthine details of one of the most important stories of our time.

However, he seems to have paid a price for talking to us on camera. Days after our interview, his wife Fatma Süslü, of Turkish descent but an aspiring Norwegian politician, left him - accusing us at Project Camelot, in the process, of being agents. Shortly after her departure he was temporarily imprisoned and his cellphone and computers were confiscated by the police. He intends to leave Norway for safer shores as soon as he can make the arrangements.

For more details on what has recently occurred, Leo copied us these letters he wrote to Greg Szymanski and Henry Makow on 8 and 13 March respectively.

Leo is a brave man, and we wish him well. We spoke with him for 45 minutes a short time ago and he is determined and resilient. The information he presents is extraordinary and detailed, and much more will be found on his own Illuminati Confessions website.
See also our tribute to Svali, Illuminati whistleblower
Here's a short extract from our 18 March 2007 phone conversation with Leo confirming the identity of the Norwegian Politician (who had contacted us about the existence of extensive underground bases and Norway's detailed plans for 2012) and relating details of their own recent conversation.

For the entire 30 minute phone conversation
Short version [To download, option-click (Mac) or Right-click and Save As (PC)]

Donations are not tax deductible for U.S. citizens.

Thank you for your help.
Your generosity enables us to continue our work.