The following text is copied from Bill Hamilton's website:

The Commentary that follows is from my [Bill Hamilton's] source that linked with inside sources and took notes on Project Looking Glass and Time Travel experiments:

“With regard to LG (Looking Glass): As I understand it, this device (at least 3 to 4 years ago) could not focus on a detailed sequence of activities in the future. In other words, you could not see exactly what would happen, like a series of events. I was told to consider the multiverse idea combined with work by Richard Gott on cosmic strings. The multiverse apparently is accessed when the forward mode is set. I was also told to consider the views provided by LG as one of many potential realities (at least in the future view mode).

I have also been told that recently there has been an effort made to outfit videotape recorders to be sent forward through the apparatus, thereby allowing the dark project people to gain some insight into what may take place.

When I heard about this several questions came to my mind. The most pressing of which was: if a camera were sent forward in time/space, would it be able to record anything other than what was immediately in front of its lens? I mean, what if LG were located in the middle of the Groom Lake facility, and the operators wanted to gain insight into the outcome of a conflict, say in the Middle East. How could a videotape recorder, set to record what was right in front of its lens at that location gather any data on the Middle East if it were still stuck in the middle of the Mojave desert when it got to the future??? Hell, something important could be happening right behind the camera and it would miss it - a couple of degrees change in camera direction allows one set of events to be seen while another set is completely overlooked, much less events half a world away.

To answer this question, my contact was not specific, saying only that cameras did not move, as mass does not change in its perspective to space time. However, such an item placed into the injected atmosphere, might experience a different time, if only briefly. And cameras could film within the gas or see images in the injected atmosphere as though it were a lens reflecting events in and around the column. I was given to understand that the tilt or positioning of the electromagnets would allow different views or positions in the environment to be reflected in the gas column.

(I feel confident that at least two rings of electromagnets are employed and that the rest of the device is composed of a barrel and the gas* injected into the barrel. (Two different sources have indicated that these are the basic components.) These magnets spin in different directions, creating a charge of some kind. Then the gas is injected into the barrel. Depending on the direction of the spin (I am sure speed and tilt and a bunch of other factors must also have an effect) time space can be warped forward or backwards by long or short distances relative to the present. I have reason to believe that the scientists have completed a map of the exact positions and speeds of the magnets necessary to reach targeted times both forward and back.)

Apparently, images of the events at different places, relative to the location of the device can be picked up and in essence reflected off the gas, causing it to behave like a teleprompter or crystal ball, for lack of a better example. But I am not entirely sure that mass does not move, or that mass is not affected. Since I was also told many years ago about an experiment that went very wrong in the early years of the LG project, involving a test subject of some kind. As I understand it there was significant movement of mass during that experiment, and it ended up with a rather gruesome death for the poor test subject. (I originally thought it was a monkey, but I found out that there were many test subjects that got sent through, so I am not certain what kind was involved in the experiment that went bad. However, in my typical reverse-logic search for corollaries, this tells me that there must have been many test subjects that made it through just fine. So I am certain that any errors that were made or any miscalculations have long since been corrected).

I wish I could offer you more information. For what its worth, my sources have confirmed the presence of electromagnets and a barrel-like device which is injected with some kind of gas [an independent source has stated that the gas concerned is argon. Project Camelot] ...these components seem necessary for LG to function as a viewing device. And as for any changes in mass, or movement within time-space....I really don't know since my information sources would only tell me 'so much' about what they saw or experienced at the time they were involved. But it can be reasoned, based upon what they did say that there were significant experiments in the movement of mass back and forward through time, many of which were successful. I am sure much has been discovered and/or refined in the process since then.”

The following images were created and supplied by Dan Burisch.

Note: the unattributed image on Bill Hamilton's website is a movie prop from the the movie "The Time Machine". 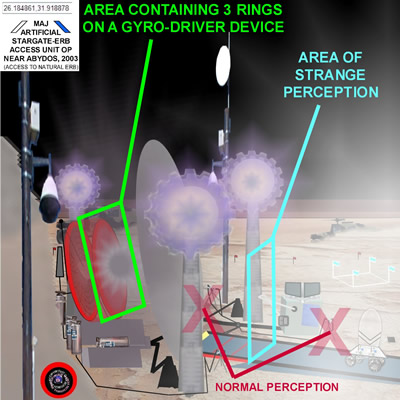 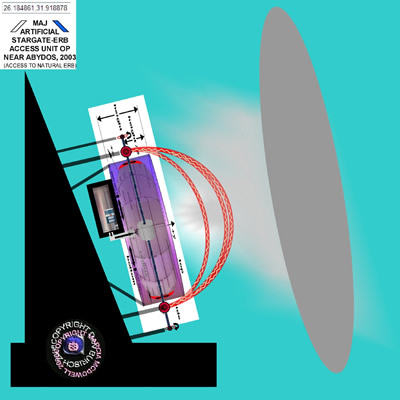 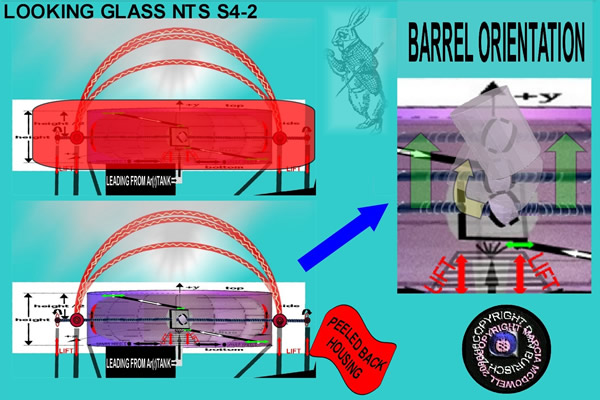