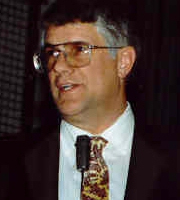 Stanley Meyer was a maverick inventor who designed an auto engine that ran solely on water, demonstrating his discovery with a dune buggy with a water-powered engine. His revolutionary car was recorded many times on film and TV.

The operating principle is that the atomic composition of water makes it a perfect fuel source. The water molecule is composed of two atoms of hydrogen and one atom of oxygen, and when the water molecule is separated into its component elements (H and O) and oxidized as fuel, the resulting energy is two and a half times more powerful than gasoline. The by-product of the combustion is water vapor – nothing more.

In previous research, the problem had always been how to deconstitute water economically. Traditional methods of separating the bond of the water molecule had resulted in failure. To power a car by these methods would not propel a car very far; the car’s electrical system could not recharge from the process quickly enough, the result being a quickly drained battery. After thirty years of research, Meyer discovered a workable method of on-board hydrogen electrolysis, creating an engine that performed at an efficiency of 100 miles per gallon... of water.

Meyer had been told that the military planned to use this technology in their tanks and jeeps. He had patents on his invention, and was ready for production. He reported that he had been offered a billion dollars from an Arab to shelf his idea, but he declined the offer.

Meyer died abruptly on March 27, 1998, aged 57, during an evening meal out. Meyer ran out of the restaurant exclaiming that he had been poisoned, and died shortly after.