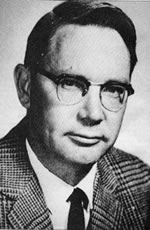 Dr. James McDonald (1920–1971), was Senior Physicist at the Institute of Atmospheric Physics and also Professor in the Department of Meteorology at the University of Arizona, and was thus perfectly qualified to lead a scientific study of the UFO phenomenon. In the 1950s McDonald had his own UFO sighting, and this experience led him to begin a private, quiet investigation of UFOs which would last for many years. In the early-to-mid 1960s McDonald went to the staff of Project Blue Book, the Air Force's official study of UFO sightings, and began to look at the UFO cases in their files. And what he found appalled him: not only was Blue Book's staff scientifically unqualified to investigate UFOs, but the Air Force's hard-line "Anti-UFO" policies had caused Blue Book's staff to simply invent many of their "explanations" for UFO incidents out of thin air, without even a brief investigation or interviews with the eyewitnesses.

By the late 1960s, McDonald had investigated hundreds of UFO cases – including many from the 1940s and 1950s which the Air Force had claimed to have "solved" – and offered convincing evidence that the cases were still "unsolved". He also used his scientific expertise to critique the beliefs of UFO "debunkers", such as Dr. Donald Menzel, a Harvard University astronomer and fierce UFO critic. Unlike McDonald, Menzel refused to interview UFO witnesses (since in his view UFOs couldn't possibly exist, any UFO witness was obviously mistaken in their observation and therefore interviewing them was a "waste of time"). Menzel's "armchair investigations" of UFO cases were often revealed by McDonald to be unscientific and illogical. Menzel, who was never able to specifically rebut McDonald's scientific and forceful criticisms of his UFO "explanations", resorted to personal attacks on McDonald, calling him a "pseudoscientist" and a "crank".

This would become a pattern with McDonald's critics: they would often ignore McDonald's thoroughly-investigated, detailed studies of UFO cases, and would instead concentrate upon attacking him personally. By 1966 McDonald was convinced that the UFO mystery was real and that it posed a major "challenge to science", and so he devoted himself full-time to investigating the phenomenon and to convincing the mainstream scientific community of his beliefs. He quickly emerged as a leading spokesman for "UFOlogy" – the scientific study of the UFO phenomenon. In effect, McDonald mounted a one-man crusade to convince his fellow scientists, and the general public, that UFOs were "serious business" and a subject worthy of scientific study.

When the US government created the Condon Committee in the late 1960s to study the UFO phenomenon and see if a "final explanation" could be found, McDonald eagerly offered his services to the committee. Given his extensive research into the subject and his impeccable scientific credentials, McDonald was a logical choice to serve, but he was not chosen as a committee member. The reason for this snub soon became clear, as the Committee's two leaders, Dr. Edward Condon and Dr. Robert Low, were revealed to be hard-line UFO debunkers, and both Condon and Low were determined to have the Committee come to an "Anti-UFO" conclusion, no matter what the Committee's research revealed.

McDonald (along with other prominent UFOlogists) made fierce criticisms of the Committee's leadership and bias, but to no avail. The Condon Report, published in 1969, couldn't find explanations for nearly one-third of the cases it examined, but Dr. Condon in his introduction to the Report flatly stated that UFOs didn't exist and that serious science had nothing to gain from studying the subject. Undaunted, McDonald wrote a number of detailed and thoughtful criticisms of the Condon Report, most of which have been ignored by the larger scientific community and Anti-UFO critics.

Nevertheless, the Condon Report marked the beginning of the end for McDonald. His strong and forceful advocacy of UFOs as a serious subject worthy of scientific attention had earned him many critics in the scientific community, most of whom wanted only to ignore UFO cases and disliked having their "intellectual laziness" on the subject revealed by McDonald. Many of McDonald's scientific colleagues began to avoid him, and he was soon isolated within the mainstream scientific community. Even worse, McDonald ran afoul of Philip Klass, the editor of Aviation Week magazine and an even more vociferous UFO critic than Menzel. When McDonald shredded one of Klass's pet theories for UFO sightings in print – Klass had argued that many UFOs were "plasma balls" caused by power lines, a theory which McDonald showed to have no basis in science – Klass went after McDonald personally in a brazen attempt to destroy his reputation.

It was an unfair battle, for while McDonald limited himself to critiquing Klass's theories and "explanations" for UFO cases, Klass ignored McDonald's scientific arguments and concentrated on personal smears and innuendo. By 1970 McDonald's life was falling apart, partly from his blackballing by other scientists, partly from the vicious personal attacks by Klass, and partly from the fact that his crusade had left little time for his family, and his wife wanted a divorce.

In 1971 came the final blow. McDonald was called to testify before a congressional committee on the new supersonic transport (SST), a plane which McDonald had studied and was convinced would harm the atmosphere. Although the subject had nothing to do with UFOs, and McDonald was not speaking on that topic, a New England Congressman who wanted the SST to be built (because it would bring jobs to the voters in his district) tried to discredit McDonald's criticisms of the SST by turning the hearing to a "discussion" of McDonald's belief in "little green men". This tactic caught McDonald completely by surprise, and although he tried to defend his UFO studies and pointed out that UFOs and the SST had nothing to do with each other, the Congressman repeatedly ridiculed McDonald and implied that anyone who believed in UFOs couldn't be trusted about their SST testimony.

By the end of the hearing open laughter and ridicule of McDonald could be heard in the congressional chamber. In fact, McDonald's criticisms of the SST were supported by many other scientists and the project was eventually dropped. However, McDonald was personally devastated and humiliated by this unfair attack, and later in 1971 he walked into the Arizona desert and shot himself in the head; but he didn't die. Although wheelchair-ridden, somehow, several months after his first attempt, he allegedly got in an automobile, drove to a pawnshop, purchased another pistol from his wheelchair, drove to the desert and shot himself again. His death was devastating to UFOlogy, as it had lost one of its greatest leaders and spokesmen. Many of his investigations and writings (especially his brilliant paper Science in Default) remain the best of their kind in the study of UFOs, and have never been adequately rebutted by his critics.