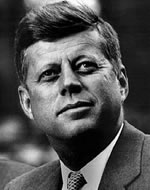 President John F. Kennedy may have had more than the usual knowledge about UFOs, according to several credible sources. Further support for Kennedy’s high-level knowledge regarding UFOs came from a former steward aboard Air Force One who told of a cryptic remark by President Kennedy.

Bill Holden, who also served as loadmaster for Air Force One, traveled with Kennedy to Europe in the summer of 1963. He said a UFO conference in Bonn, Germany, prompted a discussion of the subject aboard the President’s plane one morning.
Holden said he turned to Kennedy and asked, "What do you think about UFOs, Mr. President?" He said Kennedy became quite serious and thought for a moment before replying, "I’d like to tell the public about the alien situation, but my hands are tied."

A controversial MJ-12 document titled "Interplanetary Phenomenon Unit Summary" noted Kennedy’s insider knowledge. This document, apparently written soon after the crashes in New Mexico during July 1947, states, "It has become known to CIC [Counter Intelligence Corps] that some of the recovery operation was shared with Representative John F. Kennedy, Massachusetts Democrat elected to Congress in '46, Son of Joseph P. Kennedy, Commission on Organization of the Executive Branch of the Government. [Jack] Kennedy had limited duty as naval officer assigned to Naval Intelligence during the war. It is believed that information [concerning the Roswell crashes] was obtained from [a] source in Congress who is close to [the] Secretary for Air Force." Kennedy was the only Congressmen named who was aware of the truth of the Roswell incidents at the time.

Yet another document appears to be a memorandum written from President Kennedy to the director of the CIA regarding "Classification review of all UFO intelligence files affecting National Security." In this memo, Kennedy stated, "... I have initiated [blacked out] and have instructed [then NASA Administrator] James Webb to develop a program with the Soviet Union in joint space and lunar exploration. It would be very helpful if you would have the high threat cases reviewed with the purpose of identification of bona fide as opposed to classified CIA and USAF sources. It is important that we make a clear distinction between the knowns and unknowns in the event the Soviets try to mistake our extended cooperation as a cover for intelligence gathering of their defense and space programs.” Kennedy then asked for all files on "Unknowns" to be turned over the NASA authorities and an interim report be forwarded to the White House no later than Feb.1, 1964.

This document which clearly showed a president about to make UFO secrets available to wider circles in government and, hence, probably available to the public was dated Nov. 12, 1963, just ten days before his Nov. 22 assassination in Dallas.

Desperately clinging to their UFO-free mindset, debunkers question this document’s authenticity while an unquestionably authentic document has been found in the John F. Kennedy Library.

National Security Action Memorandum No. 271 is titled "Cooperation with the USSR in Outer Space Matters" and is addressed to the Administrator of NASA, at that time James Webb. This signed memo does not mention UFOs specifically, nevertheless, Kennedy instructs Webb to "assume personally the initiative and central responsibility within the Government for the development of a program of substantive cooperation with the Soviet Union in the field of outer space, including the development of specific technical proposals." Kennedy added that this plan was a direct result of "my September 20 proposal for broader cooperation between the United States and the USSR in outer space, including cooperation in lunar landing programs." This incredible document was also dated Nov. 12, 1963, but who in 1963 would have believed that the United States and the Soviet Union would have been engaging in cooperative joint space operations? The White House log of that day showed that beginning at 2 p.m. Kennedy had lunch and then "no official appointments" but "conferred with various staff members during the afternoon." Obviously on this day, Kennedy had more than enough time to deal with space matters.

Also obvious is the fact that this apparent attempt to cooperate with the USSR ended with Kennedy’s death in Dallas. On through the administration of Ronald Reagan, we were still warned against the "evil empire" and the costly Cold War continued. Opponents to JFK became frantic over his attempts to alter the course of previous U.S. policies. According to one knowledgeable source, Kennedy played a dangerous game, "... after making it clearly evident that he was not prepared to support action against the communists in the normal sense - plans to withdraw troops from South Vietnam - plans to fracture or abolish portions of the CIA; plans for expansion to the Justice System; failure to support the Bay of Pigs [invasion]; and a desire to share some of our most sensitive secrets with the Russians and Chinese – space borne platforms, etc... All during a time when his popularity was growing in leaps and bounds with the American public – a President who did not enjoy majority support at his election. A very dangerous situation, leaving few methods for control beyond assassination."

This same source went on to say, "I believe John F. Kennedy was appraised of, and had access to, sufficient classified information, to have personally come to the conclusion that UFOs and therefore possible alien life-forms were possibly extant within our solar system... I think Kennedy certainly came to this conclusion... and was looking to demonstrate not only mankind’s ability to come together for a common goal, but to formally demonstrate we could enter and conquer space as a species. Back then, some would have seen this as either crazy (if they had no access to the material) or (if they had access) very premature and possibly dangerous."

A whole JFK issue evolved around his planned speech at the Dallas Trade Mart, the destination of his ill-fated motorcade on Nov. 22, 1963. Several researchers and some tabloids have claimed that he planned to change his scheduled talk and referred to handwritten notes, which may have included comments regarding UFOs. These notes have never been made public and so continue to be fodder for theorists.

Spurred on by such tantalizing bits of evidence, some researchers even claimed that Kennedy’s assassination was to prevent him from revealing the news of extraterrestrial visitation to the public.

While this theory is certainly unproved and probably untrue, his willingness to end the Cold War and share our knowledge of outer space with our perceived enemies may have been the straw that broke the back of those within the Military-Industrial (and Intelligence) Complex. This group already thought the young president was "soft on communism" and a danger to their command and control structure.

With all the evidence now at hand, there can be little doubt that President Kennedy may have known more about UFOs than is generally believed.