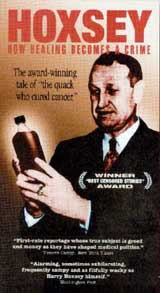 Harry Hoxsey never studied medicine, but inherited a herbal formula that his great grandfather had developed in about 1840 after watching his prize stallion cure itself of cancer by eating a variety of plants that the horse did not normally graze on while in pasture. He watched and gathered these herbs and used them to successfully treat cancer and tumors in other animals. His grandson, John C. Hoxsey, a veterinarian in southern Illinois, was the first to use the formula to treat people with cancer, and claimed to have positive results. When he died, he passed the formulas on to his son, Harry Hoxsey, who opened his first cancer clinic in 1924 in a small town in southern Illinois. Thousands of patients swore the treatment cured them; but medical authorities branded Hoxsey the worst quack of the century. So began a medical war continuing to this day.

Hoxsey went on to open a large clinic in Dallas, Texas, which he expanded to seventeen clinics across the United States. He was in a continious battle with the AMA, headed by Morris Fishbein, and the local authorities; Fishbein tried to buy the formula but when he failed, he set out to destroy Hoxsey and his clinics. Hoxsey sued Fishbein and won, causing Fishbein to have to resign his position with the AMA. But the AMA was able to get the FDA to close Hoxsey’s clinics in 1960. Hoxsey turned the formula over to his nurse, who went to Tijuana, Mexico and established a clinic to treat cancer patients.

By the 1950s, Hoxsey's Texas clinic was the world's largest, with branches in 17 states. Two Federal courts upheld his treatment's "therapeutic value." Even his arch-enemy, the American Medical Association, admited Hoxsey's treatment did cure some cases.

Hoxsey maintained that cancer is not only a disease, it’s a kind of psychosis. Therefore he treated the whole person: the mind, the spirit and the emotions. In the 1920s, 30s, 40s, and 50s this was very radical. At that same time, he recommended a diet, which in that era was also very radical because organized medicine insisted there is no connection between diet and health, or diet and disease. Hoxsey was many decades ahead of his time.

Despite his successes, there was a prosecutorial assault throughout the 1950s, but Hoxsey won almost every single trial. However, in 1967, he received surgery during which "something went wrong". For the last seven years of his life he was an invalid. Isolated and almost alone, people had forgotten about him; he died in 1974 without even an obituary in the Dallas newspapers.

Why won't medical authorities investigate the treatment? Hoxsey charged a conspiracy to suppress alternative therapies. He survived decades of being "hunted like a wild beast", only to see his clinics padlocked without the scientific test he relentlessly sought. He died a broken man, anguished over the future he felt was robbed from humanity.