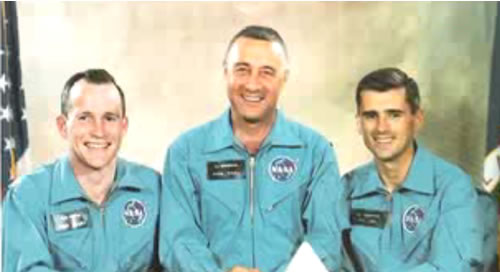 On 27 January 1967, two years before the first moon landing, Virgil "Gus" Grissom, Ed White and Roger Chaffee were killed in a devastating fire on the Apollo 1 launchpad during a full scale launch simulation. Grissom was greatly liked by his peers, was a strong character, and occupied a central position in the NASA space program. Many had predicted that it would be Grissom who would be the first to walk on the moon.

But Grissom was also an outspoken critic of the program. Among his last words before he died, when there was a communications failure with the capsule just prior to the fire, were: "How are we going to get to the moon when we can't communicate between two buildings?"

Moments later, the capsule burst into flames with the astronauts sealed inside. They were consumed by the fire with no chance to escape. His widow Betty and his son Scott both still maintain that the astronauts were killed deliberately by sabotage – and that their many questions have never been adequately answered.

Clark McClelland and John Lear insist that there was also a fourth astronaut who died in the capsule, a member of an alternative space program... the "real" one, employing top secret advanced technology, which was highly classified. After the fire, according to McClelland and Lear, a heavy cover-up ensued that continues to this day. (Please see Project Camelot's interview with John Lear for more details. Lear states that the fourth astronaut's name is known.)

Thomas Ronald Baron was a safety inspector in Apollo 1's construction. After the fire, Baron testified before Congress that the Apollo program was in such disarray that the United States would never make it to the moon. He claimed his opinions made him a target, and on 21 April 1967 reported on camera to news reporters that he and his wife had been harassed at home. As part of his testimony Baron submitted a 500 page report detailing his findings. Exactly one week after he testified, Baron's car was struck by a train and he, his wife and his stepdaughter were all killed instantly. Baron's report mysteriously disappeared, and to this day it has never been found.

The Apollo program continued, and so did the string of untimely deaths. Between the years of 1964 and 1967 a total of 10 astronauts lost their lives in freak accidents. These deaths accounted for an astonishing 15% of NASA's astronaut corps.